Nibel Genc has been held since 1994 as a political prisoner defending the freedom of Kurdish people and is presently imprisoned in the Bakirkoy Women’s Prison in Istanbul. “The Engraved Lighter” is her fictional story as told by a young girl whose great-grandfather survived the 1938 Dersim massacre along with his son, whom he managed to rescue from the hands of the Turkish soldiers. While they were caught and waiting for their fate to unfold, another prisoner gave his engraved lighter to the great-grandfather just before the prisoner was shot. 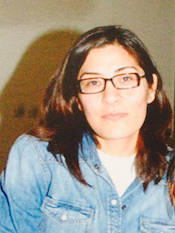 This work is licensed under a Creative Commons Attribution 4.0 International License.

Nibel Genc was born in 1972 in Mus, Turkey. She had to leave her studies in law at Istanbul University due to political reasons and has spent years in various prisons since 1994 as a political prisoner defending the freedom of Kurdish people. She is presently being kept in the Bakirkoy Women’s Prison in Istanbul.

She was awarded the first prize for story writing by the Aix-Marseilles Mediterranean Forum 2005 in which the theme was Violence Against Women. Her stories have been published in various literary magazines such as Siya, Mahsus Mahal, and Notus Publishing in Turkey.

Zeynep Genc facilitated publication of The Engraved Lighter on behalf of her sister Nibel Genc, who is presently confined as a political prisoner.